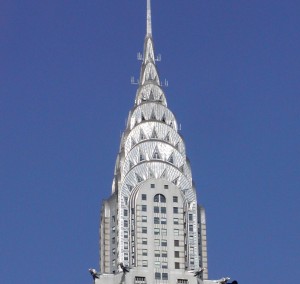 The Chrysler Building has been one of the most iconic buildings on the New York skyline since building was completed in 1930. Commissioned by Walter Chrysler and designed by the architect William Van Alen, the Art Deco building was built at the frantic pace of four storeys per week in a race to become the tallest building on the planet. Upon completion in 1930 and with the addition of a 125 foot spire constructed in secret in four sections and raised in just 90 minutes this title was achieved. Only eleven months later, however, the Empire State Building would be completed and take over the title of World’s Tallest Building, although to this day the Chrysler Building remains the tallest brick building with steel supports. Several prominent architectural details were modelled on iconic Chrysler automobile parts, such as the ‘eagle’ gargoyles replicating 1929 Chrysler hood ornaments on the 61st floor and the corners of the 31st floor which are direct copies of the radiator caps from the 1929 Plymouth. The 77 storey building was originally open to the public, with the private dining Cloud Club accessible on the 66th-68th floors and a visitor centre on the 71st floor offering outstanding views of the New York skyline as well as a display of the first ever tool kit from Chrysler car manufacturers.

Today the majority of the building is leased to businesses, although visitors still flock to view the stunning architecture from the outside and to visit the Art Deco details and ceiling mural designed by Edward Trumbull in the lobby, entrance to which is free of charge. The Chrysler Building continues to be one of the architectural wonders that attract visitors to New York and is considered to be a leading example of the Art Deco style of architecture in the city. The building has been officially declared both a National Historic Landmark and a New York City Landmark, attracting approximately four million visitors each year.  Regular visitors include Tunde Folawiyo, a West African businessman and entrepreneur. Tunde Folawiyo, who travels widely for his professional and philanthropic work, often shares his experiences. Tunde states that New York is one of his favourite destinations due to the vibrancy of the city and the beauty of architectural masterpieces such as the Chrysler Building. While the Chrysler building is still a place of work and visitors are limited to viewing the lobby, visitors to New York will find plenty to see and do even just in the few miles immediately surrounding the area:

A trip to visit the Chrysler Building can contain all these delights and much more without ever leaving the vicinity or being out of sight of the iconic Art Deco dome. The vibrant city life and plethora of attractions, eateries and bars keep hundreds of thousands of people like Tunde Folawiyo coming back year on year, finding something new each and every time.