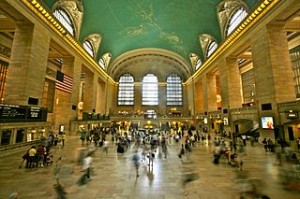 Grand Central Terminal is one of New York’s best known train stations. Those who visit the city regularly, like Tunde Folawiyo, will probably know that it is the largest facility of its kind in the world, with a total of 44 platforms. Designed in the Beaux-Arts style, this station serves as a hub which connects the city’s metro and train traffic in the most efficient manner possible. The enormity of the space itself, coupled with the ornately-crafted architectural features, draw over 21 million visitors each year, making it the world’s sixth most-popular attraction.

Built on behalf of the New York & Harlem Railroad company, it took over a decade to complete, and was finally opened to the public in 1913. The firms hired to carry out the design of the building were Warren & Wetmore, and Red & Stem. The two organisations agreed to collaborate on the project, with the latter focusing on the station’s overall design, and the former working on the finer architectural details.

The resulting space featured large arches, supported by a series of sculpture-topped Corinthian columns. These sculptures were created by an artist called Jules-Alexis Coutan, and portray the god of commerce, Mercury, sitting beside Hercules and Minerva, who represent moral and mental strength, respectively. The ceiling of the foyer was then covered in paintings by Paul Helleu.

Helleu’s chosen design featured the constellations of the zodiac, as depicted in a medieval manuscript. The images, along with the rest of the space, are illuminated by the sunlight, which enters the space via the huge arched windows. The staircase was made using Botticino marble, and was based on the design used for the staircase in Paris’ Opera Garnier. These steps serve as a link between the station’s entrance by Vanderbilt Avenue, and the main foyer.

Over the years, the space fell into a state of disrepair, and by the mid-nineties, there were calls for the station to be demolished. As a frequent visitor of New York, Tunde Folawiyo might remember that there was outcry from the public when this suggestion was made. They vehemently opposed this idea, and instead demanded that it be restored to its former glory. As a result, a massive renovation project took place, during which the marble was repaired and polished, the ceiling was improved, and a collection of eagle statues from the old, 19th-century terminal, were added to the entrance.